06 Jul, 2020 By Allan Kennedy With Comments are off for this post

In this guest post, Maurice Millar explores the life and work of the often-overlooked Dundee Colourist painter John Maclauchlan Milne.

John Maclauchlan Milne (1885-1957) – JMM –  was in the same places, at the same times, doing the same thing, as those who would later become known as ‘The Scottish Colourists’, namely the artists S.J. Peploe, F.C.B. Cadell, J.D. Fergusson and Leslie Hunter. Some would now include him as ‘The Fifth Scottish Colourist’ and others as ‘The Dundee Colourist’.

His name is still known to collectors, dealers and auction houses, but he has been overlooked in the general memory of Scottish art. His heyday was between the world wars.

With his artist father Joe Milne (1859-1911) and family, he had moved to Dundee in 1908/09. JMM became active in the Dundee Art Society and later he would be elected president for 1919 in absentia when he was still serving with the Royal Air Force in France and Belgium following the First World War. 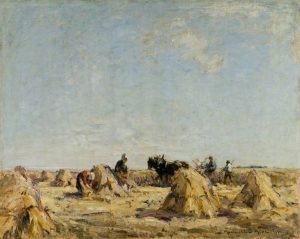 JMM’s early painting style was similar to his father’s. The McManus, Dundee has a strong collection of works by Milne including ‘A Fife Landscape’ (1920), which marks the end of his early period. A change was about to happen and this became evident in his first French paintings in the post-war period.

JMM’s Royal Scottish Academy obituary recorded: ‘Like Peploe, he saw Cézanne and was immediately conquered’. He  returned to France in 1920: to paint in Paris. In subsequent years in the 1920s (1924, and each year from 1926 to 1931), he would travel to the Côte d’Azur and his legacy includes paintings from locations all along the Riviera from L’Estaque, west of Marseilles, to St Paul de Vence, near Nice. He painted in Cassis in 1924, as Peploe and Cadell did. Peploe and Fergusson were painting in Cassis in 1913. Cadell was there in 1923, returning with Peploe the following year. Hunter was in Cassis in 1927.

The Bloomsbury Group in France (Vanessa Bell, Duncan Grant, Roger Fry and others) had already discovered Cassis and St Tropez. Roger Fry painted at Cassis in 1915 and St Tropez in 1919; Bell and Grant painted at St Tropez in 1921. Dundee’s then Liberal Member of Parliament, Winston Churchill, also painted at Cassis in 1920. In travelling to paint along the Côte d’Azur, they were all following Paul Cézanne, Auguste Renoir, André Derain and many others. JMM’s dated paintings mark his travels.

The continuing puzzle is that he does not feature in the recorded histories of any of these other better-known characters.

In the same way that ‘Bunty’ Cadell was supported by art collectors and Glasgow ship-owners George Service (in the 1920s) and Ion Harrison (in the 1930s), so JMM was supported by William Boyd in Dundee, who acquired many of his paintings. Boyd had been the Managing Director of James Keiller & Sons and, following the merger with Crosse & Blackwell in 1920, he retired to concentrate on his art collection and philanthropic works. 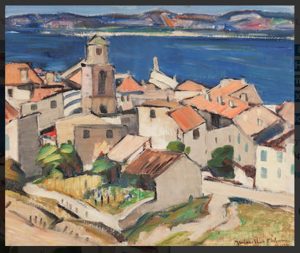 This coincided with JMM’s return to painting after the First World War, his election as president of the Dundee Art Society, and a significant exhibition in Dundee organised by Matthew Justice of Thomas Justice & Sons. The Justice company of cabinet-makers and upholsterers was well established with major retail premises in Whitehall Street, Dundee. As a diversification, Matthew Justice arranged an exhibition of modern French art in February 1920 comprising works by Vincent Van Gogh, Pierre Bonnard and Edouard Vuillard.

Percy Moore Turner of The Independent Gallery in London and Paris delivered his public lecture ‘Modern Movements in Art’ in Dundee on 11 February 1921 and JMM had his first solo exhibition in March 1921 at Murray’s Galleries at 106 Nethergate in Dundee.

So the early years after the war was a time of radical change in modern art; and collectors and dealers in Dundee were at the heart of this in Scotland. This was the time when JMM, inspired by the pictures of Paul Cézanne, departed from the Victorian style which he had learnt from his father and uncle William Watt Milne (1865-1949) and began to follow his own path to France instead.

JMM did not turn his back on Scotland completely, and his exhibited and dated works from the 1920s include ‘Torridon – Ross-shire’ at the RSA in 1923. By the end of the 1920s the art market was changing. The financial collapse of 1929 was followed by years of economic depression. 1931 may have been JMM’s last continental painting trip and William Boyd stopped collecting his pictures. He painted in Scotland in subsequent years (‘Larig Ghru’, 1931; ‘Perth from Kinnoull Hill’ 1932; ‘Durness Sutherland’, 1933; ‘Sound of Sleat’, 1934), and exhibition records include pictures from Glenelg, Morar, Glen Lyon, and Skye. 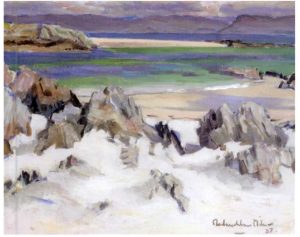 Just like Cadell and Peploe (and many others) had done previously, JMM went to Iona to paint and his exhibits in 1937, 1938 and 1939 include ‘North Shore, Iona’, ‘Sound of Iona’ and ‘Treshnish Isles’.

1940 brought a further big change when JMM left Dundee, after 30 years, to live on Arran. His exhibition in his studio in the Nethergate in April 1940 seems to mark the end of his time in Dundee. There are a few dated paintings of Arran from earlier years (1932 and 1934), but the continuous stream of Arran paintings started in 1939 and continued until 1956. He died in Greenock in October 1957.

There are 37 JMM pictures in public collections (see the Art UK website) and The Estate of John Maclauchlan Milne is represented by the Portland Gallery, London. His paintings frequently appear at major UK auctions and, whilst he is known to dealers and collectors, John Maclauchlan Milne, RSA remains for a wider audience the Missing Colourist.

Maurice Millar’s detailed biography, ‘The Missing Colourist: Searching for John Maclauchlan Milne, RSA’, is complete and a publisher is now being sought. Contact him at maurice.millar@icloud.com.