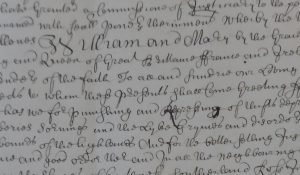 The Centre for Scottish Culture has partnered with the University of Stirling for a major, three-year research project entitled ‘The Scottish Privy Council, 1692-1708: Government from Revolution to Union’.

Funded by the Leverhulme Trust, the Scottish Privy Council Project will research one of the most important institutional branches of Scottish government in the early modern period. No published records exist for the Council in the years from 1692 to 1708 and the key aim of the project is the creation of an online digital record, combined with a simultaneous programme of research. Working with this exceptional record, the themes of law and order, national security, social cohesion and disruption, social control in support of the church, the prevalence of economic distress, the nature of micro and macro-economic policy, the qualities of institutional cooperation between the Council and other national and local bodies, and the character of foreign relations with England and continental Europe, reflects just some of the avenues of research that can be investigated.