The Missing Colourist? Searching for John Maclauchlan Milne RSA Who was Expected to go to Church in Early Modern Scotland?

22 Jun, 2020 By Allan Kennedy With Comments are off for this post

In this guest post, Murdo Macdonald, Professor Emeritus of the History of Scottish Art at the University of Dundee, tells us about his new book, Patrick Geddes’s Intellectual Origins (Edinburgh University Press, 2020).

My book, Patrick Geddes’s Intellectual Origins (Edinburgh University Press, 2020) explores the interdisciplinary achievement of one of the key thinkers of the late nineteenth and early twentieth centuries. Patrick Geddes’s integrated ecological and cultural vision had international impact. Yet despite the fact that his Outlook Tower and Ramsay Garden are prominent and intriguing features of the Edinburgh skyline, and despite the fact that he spent thirty years as professor of botany at University College Dundee, the distinctively Scottish intellectual context of his thinking has not been understood. My book places Geddes with respect to his own intellectual background, a background which had interdisciplinarity at its heart. It explores the relevance of that generalist view to his achievements local, national and international. 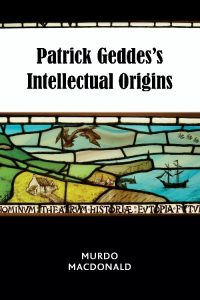 The book highlights Geddes’s insistence on the importance of arts to sciences and vice versa, the distinctively Scottish context of that approach, and how that approach informs his interdisciplinary achievements in Edinburgh, Dundee, Paris, London and India. I pay particular attention to his leadership of the Celtic revival both from a Scottish perspective and with respect to international links, not least with Indian cultural revivalists such as Sister Nivedita, Ananda Coomaraswamy and Rabindranath Tagore.

In exploring Geddes’s Scottish intellectual background I emphasise that his originality – whether in ecology or cultural activism – was embedded in the interdisciplinarity characteristic of the Scottish intellectual tradition. He echoed the thinking of Scottish academics of an older generation such as the pioneering educationist Simon Somerville Laurie and the Milton scholar David Masson (both Edinburgh academics), and those of his own generation such as the St Andrew’s classicist, John Burnet. On the other hand he found international links in like-minded figures such as Rabindranath Tagore in Bengal, Jane Addams in Chicago, and the Reclus family of geographers in France. Indeed that French geographical tradition became the keystone of Geddes’s research leadership in botany and ecology at University College Dundee. It is also intriguing to find Geddes not simply interested in the Arts and Crafts movement but absolutely at the heart of it in both Liverpool and Edinburgh in the late 1880s. In the next decade Geddes was the focal point for the interdisciplinary-minded artists and writers of the Celtic revival in Edinburgh and Dundee. Developing soon after in Glasgow was the equally interdisciplinary circle of Charles Rennie Mackintosh. There were close links between Geddes and Mackintosh and, as Geddes makes clear in Cities in Evolution (1915), he was well aware of Mackintosh’s European importance.

My immediate aim with this book is to fill the gap that has resulted from lack of interest in Geddes’s Scottish intellectual heritage. But there are many other omissions needing to be properly researched, for example a comprehensive assessment of Geddes’s visual thinking is long overdue. There is now an excellent opportunity to pursue such research thanks to the recent Wellcome-funded project Evergreen: Patrick Geddes and the Environment in Equilibrium, a joint project of the Universities of Edinburgh and Strathclyde, which has united the Geddes holdings of those two universities in one online catalogue.

My hope is therefore that my book will encourage the writing of numerous other works. Patrick Geddes is a major thinker who demands to be revisited again and again and from different points of view. The more doctoral and post-doctoral work the better, across both the humanities and the sciences. Geddes is as rich a subject as John Ruskin or Charles Darwin or William Morris (all of whom he knew), but he is more interdisciplinary that any of them, and he deserves a literature to match. The more so because his message of the need for both cultural and ecological sustainability is one that the world can no longer afford to ignore. 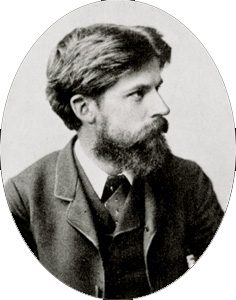 I also take the opportunity in my book to draw attention to the significance of Geddes’s contributions to University College Dundee. These are still not fully appreciated, but they include the very first botanical surveys of Scotland which were made by Geddes’s students in conjunction with the map-maker J. G. Bartholomew. Those contributions were fundamental to the development of ecology as a discipline. In that regard I build on a chapter I wrote for Victorian Dundee (2000, 2011) but in the present book I take the Dundee links further by drawing attention not only to Geddes’s work at the university, but also to the significance of Dundee as a higher education provider for Geddes when he was himself a student in the 1870s, before the university existed. I conclude my book with an exploration of Geddes’s farewell lecture to University College Dundee, given in 1919 before he took up his post as professor of sociology and civics in Bombay. That lecture is one of the great statements of Geddes’s interdisciplinary ethos.

I had hoped to explore the Dundee aspects of the book in particular in a lecture scheduled for Discovery Point in March 2020, but due to the pandemic that had to be cancelled. I hope it can be rescheduled for a later date.

Read an interview with the author here.

Read about the Geddes cataloguing project (Universities of Edinburgh and Strathclyde) here.