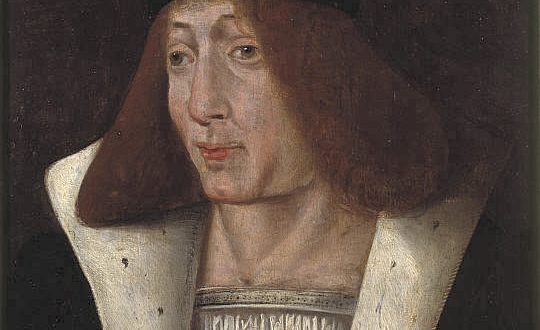 Scottish History at a Glance: The ‘Black Dinner’ of 1440

30 Mar, 2022 By Allan Kennedy With Comments are off for this post

Our History lecturer, Dr Allan Kennedy, looks at the notorious executions of two noblemen under suspicious circumstances during the minority of James II. This article first appeared as part of the ’10 Minutes On…’ column in History Scotland magazine, with whose kind permission it is republished here.

The assassination of King James I in 1437 plunged Scotland into a period of intense instability. The new king, James II, was only six, and his minority, lasting until 1449, would see various political figures struggling for control. Among these ‘big beasts’ was Archibald Douglas, 5th earl of Douglas, leader of the ‘Black Douglases’, easily the most powerful and important noble dynasty in late-medieval Scotland. It was this power, along with his status as next-in-line to the throne after the boy-king, that allowed Douglas to rise quickly to the position of lieutenant-general – effectively regent – before his sudden death in 1439.

The removal of Douglas led to a protracted power-struggle between various political factions, mostly importantly surrounding the formidable queen mother, Joan Beaufort, on the one hand, and the chancellor, William Crichton, on the other. But it also left the vast Douglas inheritance in the hands of a very young heir; William Douglas, the new 6th earl of Douglas, may only have been fifteen at the time of his father’s death. How would this untested youth cope with suddenly becoming the most powerful magnate in Scotland, at a time when politics was even more ruthless and bloody than normal?

He never got the chance to find out. On 24 November 1440, Douglas and his brother, David, were invited to have dinner at Edinburgh Castle. While there, they were seized by Crichton’s men, accused of treason and summarily executed. Our best contemporary source for the ‘black dinner’, as it became known, is the ‘Auchinleck chronicle’, and its account is laconic in the extreme: it notes only that the Douglas bothers were ‘put to deid’, giving no hint as to how it happened or what the precise charges were. Subsequent chroniclers, however, greatly embellished this barebones narrative, claiming that the brothers were dining in the presence of James II himself when Crichton placed a bull’s head (a symbol for the execution of traitors) on the table. They were then dragged off to a show-trial before being beheaded on castle hill.

These same later writers often implied that the murders were, in essence, a law-and-order measure. They cast Douglas as a haughty trouble-maker whose meddling in public affairs was threatening to destabilise the realm; he was simply too much of a loose-cannon to be left alive. The problem with this version of events is that there is no evidence of Douglas (who was, after all, still only about sixteen) playing any role in public affairs at all, let alone a destructive one. Equally, if the assassins’ goal was to eliminate a potential rival to their own power, then murdering both Douglas and his brother, thereby placing the vast Douglas patrimony in the hands of a much more experienced heir – their great-uncle, James, earl of Avondale – was a curious strategy.

A much more likely explanation for the ‘black dinner’ is that Avondale himself was behind it. After the death of the lieutenant-general in 1439, Avondale – nicknamed ‘James the Gross’ because of his fatness – had aligned himself with the Crichton faction, and by 1440 their grouping had secured ascendency by kidnapping and imprisoning the young James II. But their dominance rested, in part, on the fact that Avondale seems to have been administering the Douglas estates on behalf of the under-aged earl, or at least helping to do so. Perhaps, then, the two young Douglases had to be removed so as to ensure that the Crichton/Avondale alliance, and the power it promised, would not be threatened? Or maybe Avondale’s motivation was simpler, and he just wanted to get his hands on his great-nephew’s vast lands? Either way, his conspicuous failure, once succeeding as 7th earl of Douglas, to do anything to avenge the murders looked highly suspicious, even in an age inured to political brutality. It is this frisson of familial betrayal, coupled with the youth of the victims and the egregious breach of trust committed by their hosts, that makes the ‘black dinner’ so enduringly shocking.