The Crook of Devon Witches Tales from the Dundas Archives 2 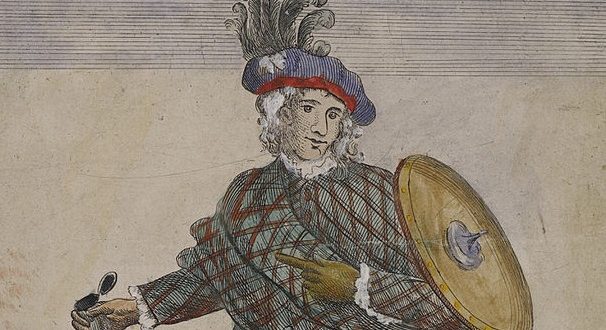 The Bandit of Callander: Crime and Marginality in Restoration Scotland

12 Oct, 2020 By Allan Kennedy With Comments are off for this post

Dr Allan Kennedy tells the story of the little-known bandit Calum Og McGrigor, who terrorised the Stirlingshire area throughout the 1660s, and asks what his crimes can tell us about deviance and marginality in 17th-century Scotland.

Banditry was a major problem in 17th-century Scotland, particularly the Highlands. Marauding groups of ‘broken men’ – individuals acknowledging no lord, permanent residence, or firm position within the social hierarchy – supposedly stalked the landscape, terrorising anybody travelling the countryside or in possession of anything worth stealing. While a strong case can be made that the extent of Highland banditry was exaggerated by contemporaries, there is no doubt that bandits did exist, and that curbing their activities was a major preoccupation of all 17th-century governments, particularly that of Charles II (r.1649-51/1660-85).

The making of a bandit
One of the most colourful of these bandits, and a man whose career throws into sharp relief the underlying dynamics of bandit activity, was Calum Og McGrigor. McGrigor was a native of the Stirlingshire parish of Callander. Nothing is known about his childhood and youth, but he first enters the historical record in 1650, when he began a relationship with a local woman named Christian MacGregor, apparently having two illegitimate children with her over the course of the following decade. 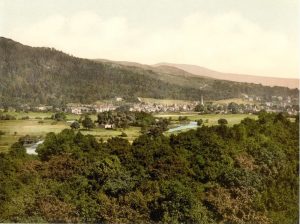 Callander. By Snapshots Of The Past.

By 1663, however, Calum had moved on to a new partner, Elizabeth MacGregor, with whom he had further children. Serial fornication of this kind was of course a major taboo as far as the early modern Church was concerned, and there are suggestions that Calum’s antics were beginning to earn him a notorious reputation in the local area. What made things much worse, however, was that his two lovers – Christian and Elizabeth – were sisters, meaning that he was not only guilty of fornication, but also, according to contemporary definitions, of incest. Calum was accordingly censored by the Church and forced to do ritual repentance, in this case by appearing in front of his local congregation wearing sackcloth. He may also have been subject to criminal proceedings, incest at the time being a capital offence. If so, the incest charges might have forced McGrigor to go on the run, for in the following year – 1664 – he re-emerged as a vicious outlaw.

‘Notorious vagabound and habituall sorner’
Over the next five years, there followed a bewildering array of increasingly daring criminal actions. McGrigor seems to have started out with blackmail, for example asking for £100 from a man named Archibald Muir, who lived near Dunblane, for the recovery of twelve cows recently stolen from his lands – lifted, almost certainly, by associates of McGrigor himself. He repeated the same trick multiple times, including on one occasion when he rather boldly targeted a nobleman, Alexander Stewart, Lord Blantyre, from whom he extracted 20 dollars – more than £1,000. Eventually he felt confident enough to range far and wide in pursuit of folk to blackmail, at one point in around 1667 stealing two mares from the MacDonalds of Glencoe, themselves hardly the softest of targets, in hopes of securing payment.

As well as blackmail, McGrigor began to operate a lucrative protection racket. The idea here was to demand money from people in return, bluntly, for not roughing them up. In 1667, for example, he came to James Keir in the parish of Dunblane and demanded that he, on behalf of his neighbourhood, pay McGrigor 50 merks to ‘save them from prejudice’. Keir, quite bravely, refused. McGrigor was more successful with one James Graham, who lived nearby and from whom he was simultaneously trying to extort cash. After repeatedly appearing outside Graham’s house and demanding payment in a ‘boasting and masterful way’ so that Graham could avoid ‘hazard’, McGrigor succeeded in wringing £120 from his quarry.

A still simpler approach was straightforward robbery. At Hallowe’en 1667, for instance, McGrigor and three or four associates descended on the house of Andrew Stewart in Menteith, apparently seeking lodgings but in the end settling for stealing an unspecified sum of money. A couple of months later, another Menteith resident, John Mackisone, fared even worse, when McGrigor and up to six associates turned up in the dead of night. A later account took up the story:

Becaus the said John did refus to opin the doores of the hous he did most insolently and wickedly break opin the samen and haveing entered the said hous did threatin to kill him and did crawly beat him and hold his eyes to the fyre of purpise to force him to give vnto the said Caluim ane considerable soume of money quhich he did demand vntill in end he was forced for fear of his lyf to give him fyve dollers [c.£300]

As with all Highland bandits, though, McGrigor’s speciality when it came to robbery was livestock, which could then be sold on illegally for profit. His largest recorded operation of this kind took place in 1667, when an entire herd of cattle, numbering up to 40, was driven away from the lands of Walter Graham of Boquhapple. 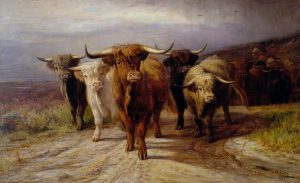 Cattle theft was the stock-in-trade of Scottish bandits. By Joseph Denovan Adam, held by The Stirling Smith Art Gallery and Museum.

Downfall
It is not clear what brought Calum Og McGrigor’s criminal activities to an end. Bandits were typically captured either through co-ordinated action between central government and local communities, or as a result of some mistake or failure on their own part. Whatever happened in McGrigor’s case, he was clearly in custody by the autumn of 1669 (in fact, he seems to have been captured a year or so earlier as well, but on that occasion he managed to escape), since it was on 20 November that year that he appeared for trial before the Court of the Justice General, Scotland’s central criminal court, in Edinburgh. The verdict was never in doubt; an assize of fifteen men found McGrigor guilty, and he was sentenced to be hanged.

What, then, can we learn from the relatively brief bandit career of Calum Og McGrigor? Perhaps most obviously, his activities – the robbery, the racketeering, the violence – reflect the core modus operandi of the Highland brigand, giving us a concrete example of how such outlaws lived and thrived.

McGrigor’s case can also shed some light on the way contemporaries understood brigandage, not least through the wording of his 1669 indictment. McGrigor, this document claimed, had been ‘long a Lous and broken man and a vagabound and […] altogider idle and uithout any land [or] imployment’. Such language suggests that, for the authorities, criminality of McGrigor’s type was problematic not just because it was violent and destabilising, but because it represented a ‘normative’ challenge. In becoming a bandit, McGrigor was rejecting all the standard social roles he might have been expected to play. Much like vagrants, witches, or Gypsies, bandits were so frightening because their very existence struck at the core structures of order and hierarchy that governed early modern society. Little wonder, then, that contemporaries recognised only one proper response to bandits like McGrigor: they had to die, either in the field, or on the scaffold.

McGrigor’s case is interesting for one further reason. Historians tend to offer systemic explanations for the existence of banditry, such as population pressure, economic hardship, or social discrimination. No doubt these were in play for McGrigor, but he highlights an important caveat insofar as his descent into criminality followed a serious personal scandal. Although we cannot be certain, it seems probable that it was the disgrace resulting from his incest that forced him into outlawry. While, therefore, we should be aware of the structural backdrop, Calum Og McGrigor reminds us that we cannot overlook highly personal factors, and the details of individual biographies, if we are to understand what pushed bandits onto the criminal margins of early modern society.

D. McCormack, ‘Highland Lawlessness and the Cromwellian Regime’ in S. Adams and J. Goodare (eds.), Scotland in the Age of Two Revolutions (Woodbridge, 2014), 115-134