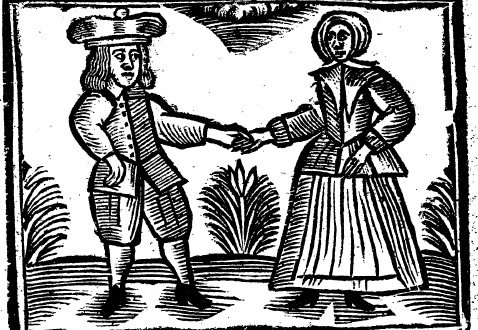 ‘Scotch Songs’ and English Perceptions of Scotland in the Restoration

14 Sep, 2020 By Allan Kennedy With Comments are off for this post

Dr Allan Kennedy looks at the vogue for Scotland-based popular songs in Restoration England, asking what their subject-matter was, and what they can tell us about English attitudes towards Scotland in the later 17th century.

The Restoration (1660-c.1688) is well known as an age of exuberant artistic expression in England, particularly London. Released from the moralising constraints of the Commonwealth, and taking its lead from a merrily pleasure-loving king in the form of Charles II, the era saw seismic developments in the visual arts, music, literature and, perhaps most characteristically, drama: troops of actors (including, for the first time, women) performing bawdy comedies or melodramatic tragedies remain one of our most familiar images of Restoration England.

In this sea of cultural expression, there was a minor vogue for what might be termed ‘Scotch songs’. These were a particular form of the popular ballads that were churned out in huge numbers by English printing-presses every year, usually setting new lyrics to popular tunes, often with the intention of permitting a participatory sing-along. The ‘Scotch song’ variant was usually a tale of rural life, but set in Scotland and tending to employ distinctively Scottish tropes, including stereotypical ‘Scottish’ dialect and names (Jenny, Jockey and Sawney were particular favourites).

Sometimes ‘Scotch Songs’ were part of larger works, especially plays, musical interludes being a standard feature of the Restoration stage. The prolific song- and playwright Thomas D’Urfey, a frequent dabbler in the genre, for example embedded an original ‘Scotch Song’ into his play The Virtuous Wife (1680). Often, however, these songs were printed as standalone products, usually cheaply and crudely, rarely occupying more than a single sheet of paper and often being paired with rough woodcut illustrations. This mode of production suggests they were, like all broadsides, intended for wide and popular circulation; these were not elite works of art, but pieces of ephemera firmly pitched at a general market.

‘Scotch songs’ – like popular ballads more generally – were almost always about personal relationships, and often they resembled miniature love stories. In The Scottish Contract (c.1665), ‘Willy’ tries to seduce ‘Meggy’, but she, though reciprocating his affections, refuses to yield unless they marry. A lovestruck Willy agrees, and the remainder of the song takes the form a wedding-planning dialogue between the two. They end by reiterating their commitment to one another:

A Bridegroome stalk to bring,
My hony doe not forget,
And I’le provide a Ring
For Meggy to wear of Jeat:
And now adieu my dear,
Next Holiday wee’le be Wed,
My Willy thou needs not feare,
Thou shalt have a Maiden-head.

Some songs were simpler still: An Answer to Nanny O (1685) consists merely of the title character repeatedly declaring her undying love for ‘Willy’, ultimately promising that the two will soon marry, at which point – echoing the climax of The Scottish Contract – ‘I’le afford my Maiden-head/to thee my True-Love Willy O’. 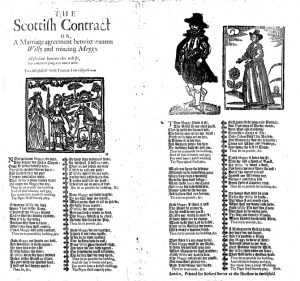 Yet while ‘Scotch songs’ like these presented an idealised picture of rural love and courtship, others were harder-nosed. In The Scotch Lass Deceiv’d (c.1688), a young Scottish girl is wooed by a man named Jockey. He pressures her into sleeping with him, but she resists until, eventually, Jockey promises to marry her. The girl relents, but as soon as the deed is done, Jockey abandons her, declaring ‘’tis Marriage enough…for us to Bed’. And just in case any listeners failed to get the message, the song ends in none-too-subtle style:

Bonny Lasses all take care,
No Lads e’er delude ye into sike a Snare:
For if they once creep into your Bed,
You never must after expect them to Wed

Here was the ‘Scotch song’ not as love story, but as cautionary tale.

In a few cases, a song was neither idyllic nor cautionary, but tragic. One of the clearest examples of this was The Scotch Lasses Constancy (1682), in which ‘Jenny’ is wooed by two suitors, ‘Jockey’ and ‘Sawney’. The two fight a duel, and Jockey is wounded. This makes Jenny realise her love for Jockey, and she angrily rejects Sawney while trying to tend Jockey’s wounds:

Whilst for to dress his wound I apply’d me,
But wae alas his life was deny’d me,
Death had appaul’d him, gaul’d him, thrall’d him,
So that he dy’d with grief I beheld him;
And left poor Jenny all a mourning,
And cruel Sawny cursing and scorning.

Here was a quite different, much more sombre type of song, in which the conventions of the genre are used to explore issues of tragedy and loss.

A final approach available to writers of ‘Scotch songs’ – and one that we’ve already seen hinted at above – was to focus on sex. In Opportunity Lost (date uncertain), ‘Willy Stenson’ propositions ‘Peggy Benson’ in a field. She responds positively, and so Willy runs home to fetch a cloak on which they can lie. Alas, he is fated to be disappointed:

He went heam, and came agen
Slea Willy Stenson,
But he found a Miller on her wem
Oh filthy Peggy Benson.

He wisht his Cleak had been ith fire
Slea Willy Stenson,
Sen he had lost his hearts desire
And pretty Peggy Benson.

She bade him come another day
Slea Willy Stenson,
She left him sad tript away
O naughty Peggy Benson.

This was a song whose primary selling-point was apparently little more than amusement and titillation.

Even when a song did not actually depict sexual activity, it could still make use of bawdy language, as in the case of Jennies Answer to Sawny (1682). This piece tells the tale of Sawny, returning to Scotland after a fling with a ‘London Quean’, who tries to rekindle his earlier romance with Jenny. She is less than impressed, as she communicates in distinctly risqué language:

He now would Angle in my Fish-pond,
to quench those flames that scorch him so;
And wou’d put it in with his own hand,
But let him gang where the North-winds blow,
I’le be content with my former dream,
nor at his absence will I repine;
No more will I’le tast of his Curds and Cream.

Such ripe imagery makes it clear that ‘Scotch Songs’ were perfectly capable of partaking in the mischievous lewdness that was such a feature of Restoration culture in London.

What does it all mean?

Quite why songs set in Scotland should have been so relatively common in Restoration London is not entirely clear. Perhaps it was a legacy of the close intertwining of Scottish and English history during the 1640s and 1650, or maybe Scotland simply looked intriguingly rustic in an age of growing interest in the cultural mores of ordinary folk. The songs perhaps also responded to the increasing presence of Scottish migrants in England at this time; this certainly appears to have been part of the inspiration for The Scotch Souldiers Kindness (1680s), which focuses on a company of Scottish soldiers quartered in Southwark, who amuse themselves by taking the virginity of around 50 local women, leaving them all heartbroken when the soldiers march home without proposing marriage. 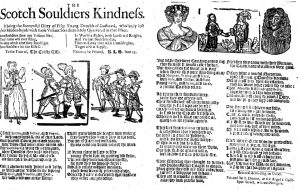 What is considerably clearer, though, is that these songs tapped into and perpetuated distinctive stereotypes about Scotland. It was an image of rural simplicity, painting the country as an underdeveloped and rather unsophisticated backwater. The prominence of sexual themes, meanwhile, spoke to a common English idea that the Scots were vaguely dissolute and uncouth, not really a people to be trusted. On a smaller scale, the ballads tell us some interesting things about what individual Scots were expected to be like – there are frequent references, for example, to that most stereotypically Scottish item of clothing, the blue bonnet. As well as preserving a fascinating strand of early modern popular culture, therefore, the ‘Scotch songs’ of the Restoration tell us a surprising amount about how English people conceptualised Scotland and the Scots towards the end of the seventeenth century

Broadside ballads, including of the ‘Scotch song’ variety, can be explored online via Broadside Ballads Online http://ballads.bodleian.ox.ac.uk/

C. Marsh, ‘The Woman to the Plow; and the Man to the Hen-Roots: Wives, Husbands and Best-Selling Ballads in Seventeenth-Century England’, Transactions of the Royal Historical Society, 28 (2018), 65-88