As a teenager Mary Wollstonecraft Godwin (later Shelley) lived with the Baxter family on South Baffin Street on the outskirts of industrial Dundee, a little while before penning one of the world’s most enduring works of Gothic fiction, Frankenstein (1818). Years later, in an introduction to a new edition of her magnum opus, she acknowledged the formative role the City of Discovery played in shaping “the airy flights of [her] imagination.” Thanks to the generous support of the Arts and Humanities Research Council, the British Academy, and the Wellcome Trust, we were able to trace the historical circumstances of Shelley’s Dundee as part of the national Being Human festival of the humanities in November 2015 and amid substantial civic and creative regeneration in the local area. We even fixed a notorious issue in Frankenstein studies: what do we call the Creature? We ran a poll on our Facebook page. The winner? Boris Frankenstein, in honour of the man behind cinema’s most iconic personation of Victor’s “fiend” (or “demon”, “wretch”, “thing”, “being, “ogre”, if you prefer): Boris Karloff. Evidently the other contenders, such as Percy Bysshe Frankenstein and Victor Frankenstein Jnr, just weren’t monstrous enough.

Headed by Daniel Cook and Chris Murray, with the support of Jen Barnes, Phil Vaughan, Damon Herd, and a group of tireless students, our team sought to engage the wider public and University body in celebrating the works of Shelley, considering their impact on literature and culture more broadly, and creating new responses in the digital age. The project built on Cook’s research and teaching interests in eighteenth- and nineteenth-century literature (including a book recently published by Cambridge University Press, The Afterlives of Eighteenth-Century Fiction), Murray’s work on comics and fiction (including a paper on adaptations of the novel in comics and graphic-novel format in Cambridge University Press’s new Companion to ‘Frankenstein’), and work on Science Fiction literature and film being carried out at the University in the School of Humanities and DJCAD. Our events also coincided with the launch of a new taught postgraduate degree in Science Fiction, the only one of its kind in the UK, and the creation of Dundee Comics Creative Space.

We began at the Dundee Science Centre with a special family fun day, Superheroes vs Monsters, in collaboration with the creators and distributors of the Saltire series of graphic novels, with whom we have previously worked on public outreach events, and whose comics have been drawn by comics graduates from the University. We worked with staff at the Centre on a series of scientific and literary events for different age groups, including public talks and hands-on activities. The fun day received media coverage in The Courier and on STV and Tay FM, the latter of which awarded prizes to children who designed the best new superhero or villain. (Subject to public demand, the Centre is hopeful that the fun day will form a prominent part of their annual offerings here on out; we’d certainly be delighted to bring the Superheroes and Monsters back to life). We returned to the Centre later in the festival to deliver a talk on the ethics of science (Frankenstein Returns!) in relation to the themes (including modern variations) raised in Shelley’s novel. This was attended by various community groups in the local area. I don’t suppose they’ll be looking at the human body in quite the same way again… 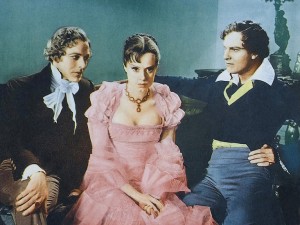 Next, we ran student-led reading groups on one of Shelley’s lesser known, but culturally pertinent works, The Last Man (1826). Our chief aim was to encourage students outwith the Humanities to consider and discuss the forthright social issues raised by the novel, which is set in an apocalyptic twenty-first century. In another attempt to engage students and the wider public with the cultural recycling of Shelley’s work we ran immersive film screenings (The Bride of Frankenstein [1935]), during which we examined the roles played by secondary authors and artists in extending the afterlife of a literary work, with a particular focus on the 1930s and later twentieth century. We also hosted a popular creative writing event in association with Braes, Ghost Writing with Mary Shelley and Friends, with the help of our postgraduate students. Through a series of mental warm-up exercises and snippet readings members of the general public were able to develop their own stories based on their experiences in ways that demystified creative writing. If you weren’t there, you’ll never know the horrors of the Legend of the Disco Skull. With the further aid of a team of creative writing and theatre students, led by Eddie Small, we ran four highly popular walking tours, Dead Dundee, on two separate nights. In these walks, which covered just over two miles in and around William Thomas Baxter’s home on South Baffin Street, our actors explored the surviving and lost sites associated with Shelley’s time in Dundee and creatively envisaged what the city might look like, and how it might influence other writers, in the near and distant future. These events in particular were heavily over-subscribed, with long waiting lists in place. Comments from attendees include: “I’ve lived in Dundee my whole life and didn’t know half of the history we learned tonight. Thank you!” and “I wanted to say thanks to the students who conducted the tour – they really brought the city to life”. Also, during the festival, Dr Cook delivered a commissioned talk, “Mary Shelley’s Dundee: The Gothic City”, as part of the 11th Annual Culture Day run by the Museum Services at the University. This was attended by the general public and colleagues from across the University. 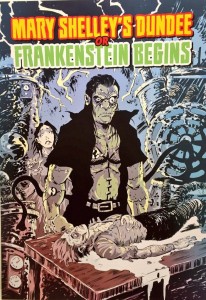 The major output of the project has been an original comic produced by staff and students in the School of Humanities and DJCAD, through the new Dundee Comics Creative Space, and with the support of the Scottish Centre for Comics Studies: Frankenstein Begins; or, Mary Shelley’s Dundee. To-date five hundred copies of the comic have been distributed, for free, to members of the general public, and the demand remains high. Based on an original script written by Dr Murray and illustrated by alumnus Norrie Millar, the comic wittily depicts Shelley’s experiences in Dundee and ends just as she is about to produce the world’s first science fiction novel, Frankenstein. Not wishing to rest on our laurels, we commissioned an immediate adaptation of the comic, which was brought to the stage by DeeCAP and the Dundee Dramatic Society, the members of which come from across Tayside and beyond, with the support of Abertay University, the University of Dundee, and Dundee and Angus College. At The McManus Art Gallery and Museum this multimedia play was performed as part of the official launch of the comic. The McManus also kindly hosted a daytime series of hands-on workshops run by Dr Murray and his comics students, in which children and their parents were able to watch artists at work and learn more about the process of bringing ideas to the page. 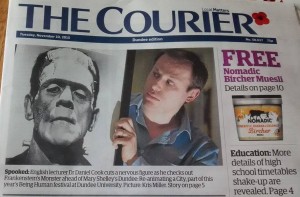 In summation, through a series of highly original and unique activities – all of which were free – we were able to bring new attention to the life and works of Mary Shelley, the mother of modern science fiction. We were also able to promote the high quality of work produced by English, History, Creative Writing, Comics, and Theatre Studies staff and students in the School of Humanities and DJCAD, while also engaging students and staff across the University more widely. We benefited greatly from the national exposure afforded by our funding from the Being Human festival, which, the organisers estimate, received at least 2.2 million engagements through social media and in footfall across the forty-one UK universities invited to take part. We also received attention in the local media (STV, The Courier, The Scotsman, and other outlets) and on prominent blogs in various fields, ranging from the history of the Gothic to silent film. More information about the festival can be found on the official website. Oh, and we took some pictures too. We wish to thank, again, all of the students, staff, and members of the general public who joined us bringing Shelley back to life. With its legend of the dragon and the nine wells, plague pits, cannibals, and others, Dundee can lay claim to being Scotland’s Gothic City.