Patronage and ‘the general taste for Portrait’: David Allan and the Erskine of Torrie Portrait Charles Maitland, Overlooked Pioneer of Smallpox Inoculation

04 May, 2020 By Allan Kennedy With Comments are off for this post

In this guest post, Dr Erin Farley explores how the popular ‘spring poetry’ of 19th-century Dundee celebrated the freeing, invigorating effect of the city’s public parks.

For many city residents, especially those in flats or tenements with no garden, our local park has become an essential respite during our daily exercise. In Dundee, we are lucky to have several pockets of green across the city, from the woods surrounding Balgay Hill and the Law to the green spaces dotted along the banks of the Dighty. My own local park is the Magdalen Green, once the traditional venue for protests, radical meetings and mass gatherings in the city.

Like most of Dundee’s parks, the Magdalen Green became the place we would recognise today during the 19th century. It has been said that, under lockdown, ‘there are two classes of people, those with gardens and those without.’ Victorian industrialisation made for a similar, stark division between those who could afford to live in the outskirts of the city, towards Broughty Ferry or across the river in Newport, and working class people in increasingly densely populated, and increasingly polluted inner city areas. Many of Dundee’s public parks were designated during the second half of the 19th century as a partial remedy to these conditions, and most of them were secured under sustained popular demand.

The Magdalen Green itself was secured as a public space in 1874, when the Council purchased the land from the Laird of Blackness. This removed the very real danger of the land being made private, but also resulted in it being formalised as a park rather than an ambiguous ‘shared space’, with paths to guide people’s routes, and rules and expectations for behaviour.

Despite this, the importance of a green space which was genuinely shared is hard to underestimate – working class housing in central Dundee was often crowded, poorly ventilated and afforded little personal space or privacy to its inhabitants, and its ill effects were compounded by working days spent in noisy, dusty mills. Retreating to a park to relax, socialise and stretch your legs became a dearly prized interlude in the day for many. This affection for city parks is reflected in the volume of urban nature poetry published in pamphlets, books and broadsides in the late 19th and early 20th centuries, in which poets reflected on life from the ‘sylvan slopes’ of the parks.

Were you to be reading one of Dundee’s popular newspapers at this time of year in the 1890s, you would by now have seen plenty of such verses celebrating the advent of spring, the associated renewal in nature, and the transformative effect this had on the human spirit. May Day was a particularly popular time for these. On 2 May 1894, the Evening Telegraph featured a seasonal poem by ‘A.D.R.’ from Monifieth, concluding with these verses:

We drink our fill of Nature’s sweets,
Ne’er to be found in busy streets
With tainted breath

The Lord’s own presence seems so near
Our breath we hold as if for fear.
We hear a voice,

In accents clear, give the command –
“Your shoes remove, for where you stand
Is holy ground.”

By the end of the century, spring poems had become so popular across the English-speaking poetry world that newspaper editors openly despaired of the floods they received. A correspondent joked in the Weekly News that a tax on spring poets would solve our economic worries, and a cartoon in the Wizard o’ the North in 1912 depicted a spring poet striding up, stack of verses tucked under his oxter. 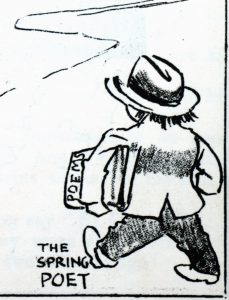 It’s true that there were hundreds of spring poems flooding editors’ desks each year, and that they may not all have been the most original in their subjects and imagery. But they had a meaning and purpose which went beyond this. Working class poets’ enjoyment of nature took place against a background of a world which understood their value only in terms of the hours they spent at a factory machine. By writing about their time away from work, they were celebrating their right to have time to spend outside of work, and to exist in parts of their city which were not the home or workplace, places which they had a shared ownership of.

In the last years of the 19th century, May Day had acquired an additional significance as a focus for European protests demanding labour rights, specifically linked to the fight for an eight-hour work day. May Day protests were infrequent in Scotland, but Dundee workers would have been well aware of the connection, with details of continental demonstrations reported on in some detail across the Dundee press. There were regular attempts to organise May Day demonstrations on the Magdalen Green throughout the 1890s, with varying degrees of success. In 1892 the Dundee Advertiser reported on 2 May that the Green saw ‘a mass meeting of Dundee millworkers’ protesting a proposed wage reduction the previous day. However, the following year’s demonstration was sparsely attended.

On May Day 1900, the Evening Telegraph printed ‘The First O’ May’ by George Watson, a popular poet who wrote as ‘The Roper Bard’ because he worked in a rope factory which ran between the Perth Road and Magdalen Green. The poem is not a directly political one, although Watson had published other work explicitly in support of the eight-hour day. It is a celebration of the park’s role as somewhere precious precisely because it is not removed from the bustle of the industrial city, but within it, somewhere where workers can come together to laugh, celebrate and find essential every-day liberty:

The sichts I see an’ soon’s I hear
Ayont the Green aside the Tay,
Fa’ saftly on my listening ear
On this the happy first o’ May.

I hear the blackbird ‘mang the trees
Fu’ blithely chant his mornin’ lay
An’ there is balm upon the breeze
On this the happy first o’ May.

There’s music in the engine’s din,
Swift-rattlin ower the metal way,
As backward doon the shed I spin,
On this the happy first o’ May.

Young lads an’ lasses nae a few
Upon the grass I see an’ hear
They weet their faces wi the dew
To mak’ them bonny a’ the year.

The gardens here look really grand
Bedeck’t wi floweries fresh an’ gay,
An’ here I trace the Master’s hand
On this the happy first o’ May.

W.N. Herbert and A. Jackson (eds), Whaleback City: The Poetry of Dundee and its hinterland (Dundee, 2013)

If you are interested in discovering more about poetry in Dundee’s newspapers, the Local History Centre at Dundee Central Library holds a large local newspaper collection. Please see http://www.leisureandculturedundee.com/library/histnews for more details.

Dr Erin Farley is the Library & Information Officer for Local History at Dundee Libraries. She works with communities around the city to share stories and ideas about the city’s history, landscape, memory and people, and is particularly interested in the power of creative histories and traditional storytelling.