What has 17th-century printing got to do with pie? 21st-Century Book Historian: Printing Who were the Jacobites and what did they want for Scotland? Inaugural History Scotland Lecture 24 April 2018 from 6:30pm 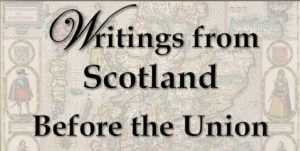 Now in its second year, Writings from Scotland Before the Unionis a one-day conference, hosted by the Centre for Scottish Culture at the University of Dundee, which seeks to further understand how Scotland saw herself in literary terms before formal union in 1707.

Registration opens at 09:30 on April 21st in the Baxter Suite in the Tower Building on the Nethergate in Dundee before the first panel begins at 10:00, running through the day and culminating with a dramatic reading of Henryson’s Testament of Cresseid performed by the JOOT theatre company.

The event is free and open to all (including lunch and refreshments) but registration via Eventbrite is ESSENTIAL.

There will also be a conference dinner at the end of the day which will be between £20-5 at a local restaurant. Please indicate whether you would like to attend the dinner by registering your interest to preunionconf@dundee.ac.uk

Our keynote speaker is Professor John J. McGavin of the University of Southampton who will deliver a lecture titled Records of Early Drama Scotland: Joining Dots and Colouring in.Our other papers include:

• Nina Fiches, University of Bristol
‘The Scottish Once and Future King: The stakes of King Arthur for the national identity of Scotland’

• Lucy Hinnie, University of Edinburgh
‘Conquering the querelle in the Bannatyne MS (c. 1568)’

‘a real distaste of the country and the service…’ Maj-Gen Hugh Mackay’s Memoirs, the Scots-Dutch and Identity during the Highland War, 1689-1691

• Dr Jamie Reid-Baxter, University of Glasgow
“To justify the wrath of God to men” – Irae divinae in Scotiam accensae: God’s wrath poured out in Latin verse, 1652.

Registration is available via the following link: https://www.eventbrite.co.uk/e/writings-from-scotland-before-the-union-2018-tickets-43977342415

For any further information, please do not hesitate to contact the organisers at preunionconf@dundee.ac.uk